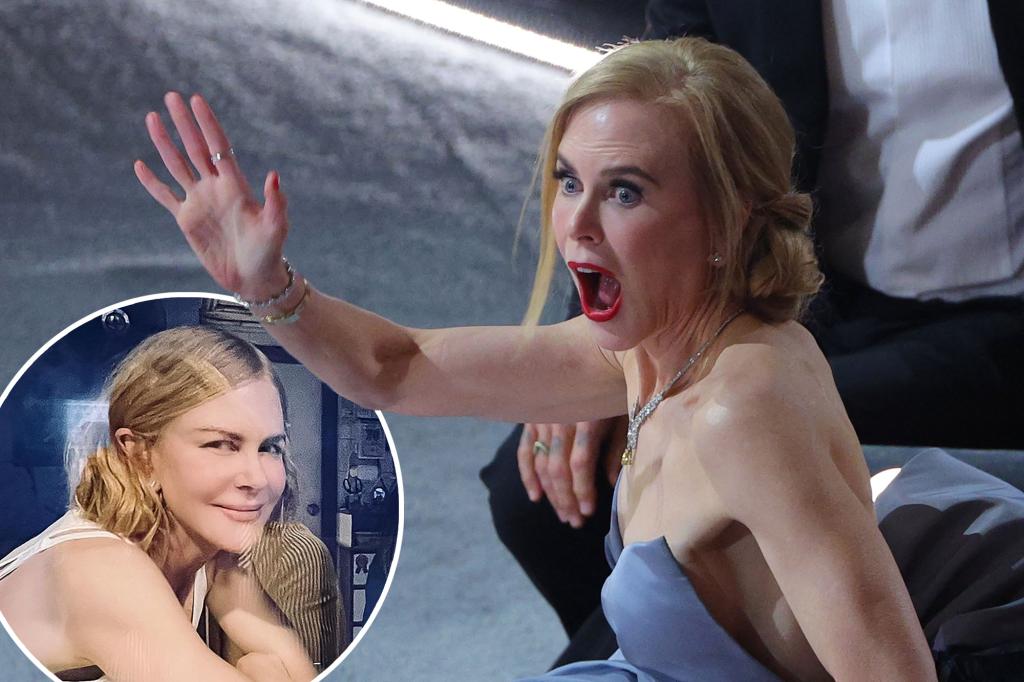 Nicole Kidman’s followers are questioning her latest social media post, a smiley snap posted to Instagram on Wednesday that shows the actress posed with director Lulu Wang on the set of the new Amazon series “Expats.”

But, according to commenters, something about Kidman’s face seemed different as her porcelain skin appeared puffy, tight and wrinkle-free.

Fans speculated that the 54-year-old Oscar-winning actress might have had work done.

“What did you do with your face?!?!?!!!? You are starting to get like a monster, it’s sad cuz you were beautiful,” wrote one devout fan on the post.

“Something is wrong with your face,” someone else chimed in.

Dual board-certified facial plastic surgeon Dr. Dara Liotta, who has not treated the actress, told The Post she believes Kidman has gone under the knife recently — or used “some serious Facetune.”

“There is little doubt that these photos make it look like she’s had facelift and neck lift surgery,” Dr. Liotta, who owns a practice on the Upper East Side, said, providing a diagram to illustrate her expert opinion.

“You can tell by the direction that the deeper facial structures have been pulled and lifted up (yellow arrows) — most evident at the tail of the brow and the corner of the mouth,” Dr. Liotta explained. “The jawline — no jowls! — and neck look tighter- and much more youthful than is possible without surgery or some serious Facetune (blue lines). The photo with the red lines shows the location of face and neck lift scars, and you can see that the area just in front of this incision line look flat. This is classic in early facelift healing, a year and less.”

Double board certified, award-winning New York-based plastic surgeon Dr. David Shafer, who has not worked with Kidman, told The Post there’s often more to the story than meets the eye.

“When people appear different, everyone’s first curiosity is if they had plastic surgery. However, other considerations must also be made — especially with the universal use of filters on social media,” Dr. Shafer said. “What someone looks like in a static picture online can be completely different from how they look in person or in real life.”

However, Dr. Shafer, whose clinic is on Fifth Avenue, doesn’t rule out operations in this instance. Plastic surgery, he explained, covers a spectrum of different procedures — which range from Botox, facelifts, fillers and liposuction — but it often gets a bad rap. Only the “bad jobs” look unnatural, he said.

“In the picture, Nicole has a youthful glow and smooth skin,” he said. “This could be filters, Botox or dermal fillers such as Juvéderm to help smooth wrinkles and replace lost volume in her cheeks. She certainly has access to the best skin care and aestheticians.”

“She looks like she has had a facelift in the past,” Dr. Rowe, who has not worked with Kidman, told The Post, adding that it’s “hard to say” if the work was recent or not.

“If it was a year or more ago, she may have a more recent change in her appearance getting laser, Botox and filler treatments to the face, as even a facelift needs to be maintained,” he added. “Her changed appearance in her Instagram photo is due to her continuously maintaining her already previous procedures. As one continues to get laser, Botox or filler in conjunction with a facelift, the appearance can tend to alter slightly over time.”

Time could also be another factor, Dr. Shafer explained, since it could just be perception based on lengthy screen careers.

“With celebrities, we get used to how they looked at their height of fame or their most memorable scene in a movie, but celebrities age just like the rest of us and change over time,” he said.

The “Being the Ricardos” actress has previously denied ever having work done on her face, insisting that it was au naturel and swearing by a skin-care routine and healthy habits.

“To be honest, I am completely natural,” she told Marie Claire in 2007. “I have nothing in my face or anything. I wear sunscreen, and I don’t smoke. I take care of myself. And I’m very proud to say that.”

But over the last 13 years, priorities might have changed. In 2011, Kidman revealed to German magazine TV Movie that she did try Botox — but stopped.

“I didn’t like how my face looked afterwards,” she continued. “Now I don’t use it anymore — I can move my forehead again.”

Gwyneth Paltrow also took a stab at it, but it wasn’t for her.

“I won’t do Botox again, because I looked crazy,” she said. “I looked like Joan Rivers!”

Joining the ranks of celebrities ditching the face-freezing procedure, Simon Cowell announced that he, too, is putting down the needle.

“There was a stage where I might have gone a bit too far. I saw a picture of me from ‘before’ the other day, and didn’t recognize it as me first of all,” Cowell told the Sun.

Admission or not, Kidman isn’t the first celebrity to face their fans’ wrath over cosmetic procedures. Renée Zellweger, Chrissy Teigen and many more A-listers have been criticized for their use of Botox.

Zellweger, who denied having surgery in a powerful essay, called comments from fans about her appearance “pretty painful.”